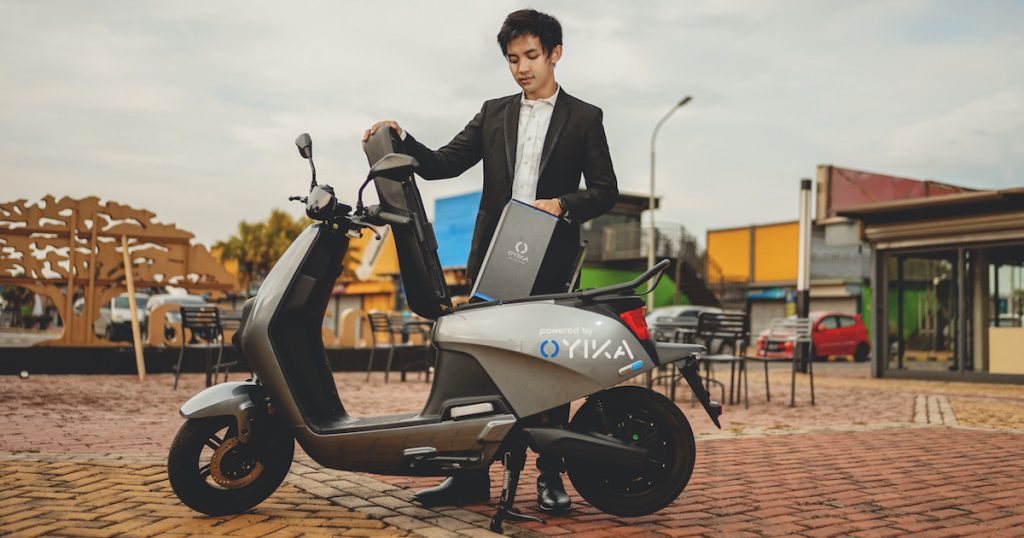 Jinsi Lee had first entered the renewable energy sector in 2007 with the ambition of building a solar thin-film manufacturing plant in Singapore.

It wasn’t the best timing though. At that time, the solar module price was at US$4 per watt. Prices had dropped faster than anticipated (for perspective, it stands at under US$0.30 per watt today), so that venture didn’t pan out.

He subsequently joined Sunseap, which became Singapore’s largest solar power producer, to spearhead their overseas operations. During his time in the company, he helped complete Cambodia’s first 10MW solar farm and a 140MW solar farm in Rajasthan, India, which was the largest for a Singapore consortium at the time.

Feeling regretful about his first failed venture, Jinsi decided to strike out on his own again with Oyika in 2018, and even received financial backing from the founders of Sunseap. To date, Oyika has received US$10 million funding.

Jinsi strongly believed that energy storage, or simply batteries, is the “next wave in renewable energy”.

He noted that solar and wind are intermittent power — depending on the time of day and weather conditions — so they require storage for that energy to be used at other times of the day, unlike traditional power plants that generate electricity with coal or natural gas on demand.

However, energy storage is still too expensive for wide-scale adoption as part of an energy grid. The economics for battery-powered vehicles is more palatable and can happen sooner.

The smaller and lighter the vehicle, the better the economics for electric vehicles (EVs), therefore the focus on powering motorbikes. Southeast Asia (SEA) happens to have the highest concentration of motorbikes in the world.

It’s also interesting to note that Oyika may be a Singapore startup, but it currently only has presence in Indonesia and Cambodia. Motorbikes constitute 85 per cent of the vehicle population in these two countries. In contrast, Singapore has a small motorbike population of only 140,000.

Out of the entire region, Indonesia owns the biggest market share for motorbikes with a total of 125 million motorbikes, and it’s also the third-largest in the world after India and China.

Jinsi shared that he also chose to enter Cambodia because he was involved in his first solar farm project there, and felt that it would be a good first place outside of Singapore to trial their battery swap products and services.

BaaS is basically a leased battery that comes with battery swaps. A rider can swap his depleted battery for a fully charged one at a nearby “swap station” located at a convenience store or petrol kiosk, explained Jinsi.

The swapping process takes less than a minute, and it’s no different from topping up petrol at a kiosk when running out of fuel. Their batteries are also compatible with most existing mass-market electric motorbikes in SEA.

We remove the upfront purchase cost of the battery from an electric motorbike. The battery can be half the overall cost of the bike, making EV adoption a more affordable and compelling proposition.

Furthermore, batteries purchased with electric motorbikes degrade over time, requiring riders to periodically replace them throughout their bikes’ lifespan. With battery swapping, riders need not worry about battery replacement and upgrades.

Oyika offers packages such as pay-per-use (US$0.05 a minute), prepaid weekly (US$18 a week) and monthly (US$72 a month) subscription plans, where battery swaps are bundled with an electric motorbike. This is a similar concept to telco subscription plans that bundle data and calls with mobile phones.

Most single trips are less than 15km, with daily trips under 30km. For a 100km range on an electric motorbike, it costs US$2 for swaps.

“A gasoline bike requires about three litres of petrol to travel 100km. Assuming pump price of US$1.50 per litre (it costs more in Singapore), that’s US$4.50 for 100km of range on a gasoline bike,” calculates Jinsi.

He further shared that when they first launched their monthly subscription plan in Cambodia in the second half of 2019, it “did not fly” even though it was cheaper than gasoline motorbikes.

He reasoned that there was a lot of “apprehension about electric motorbikes” then and after all, people were already comfortable with gasoline motorbikes.

The following year in May 2020, Oyika went ahead to launch a pay-as-you-go ride-share programme despite them not being able to step foot into Cambodia due to Covid-19.

“The goal was to make it simpler and cheaper for the public to be exposed to electric motorbikes,” said Jinsi.

Oyika even managed to secure grant support from the United Nations Development Programme (UNDP), as well as formal approval from the Phnom Penh City Administration (PPCA) in October 2021 to be a part of the city’s public bus programme.

Under this programme, the startup deployed ride-share bikes at 11 public bus stops to bridge the first- and last-mile gap and increase ridership of the buses.

According to Jinsi, their biggest business challenge is operating in an environment where gasoline bikes are already “well-established and entrenched”.

Additionally, they are promoting electric motorbikes — along with their batteries and swap infrastructure — in markets that not only have no subsidy, but also lack of financing for EVs. Particularly in Indonesia, Oyika also competes against subsidised petrol that costs one-fifth the price of Singapore.

Despite the challenges, Oyika has managed to earn the support of major electric motorbike manufacturers to pair their bikes with Oyika batteries.

It took a while, but we eventually got the buy-in Indonesia’s national e-motorbike brand Gesits to launch a bike version with our swappable batteries.

In mid-2021, Oyika also worked with international brands Yadea and Tailing, which are the world’s first and third best-selling e-motorbike brands respectively.

Both companies integrated what will be the first of several models with Oyika’s battery swap system for their foray into SEA, and the bikes are currently being homologated (certified for road use) in Indonesia.

However, Covid-19 has brought about a whole new set of challenges, such as causing significant disruptions to their expansion plans.

“We encountered months of lockdowns in Indonesia, supply chain disruptions causing delivery delays of our batteries, swap stations and electric motorbikes. Despite all the challenges, we (have) made good progress (and) established a strong network of partners, both domestically and internationally,” said Jinsi.

The pandemic has also delayed its fundraising plans, in which it targeted to raise US$100 million to roll out 30,000 power subscription plans with electric motorbike bundles across Indonesia.

Regardless, Oyika managed to secure Green Bond Certification for its operations in Indonesia with the support of the Asian Development Bank, which enables them to raise Green Bond for their expansion there.

“This also means that motorbikes powered by Oyika batteries are eligible for green finance. This is a milestone for us and a powerful statement. We can track our batteries from their inception to their second life use in energy storage systems (ESS) and final decommissioning, where they are sent for recycling,” he added.

Oyika is helping to build EV charging stations in S’pore

Singapore has been very vocal about its plans to phase out Internal Combustion Engine (ICE) vehicles by 2040.

Oyika is actually one of two consortiums that have been awarded tender by the Urban Redevelopment Authority (URA) to install 600 charging stations in public car parks.

Jinsi expressed that Singapore has the ability to be SEA’s EV capital by leading in EV adoption.

“Norway has about the same population size as Singapore, and they have shown the way forward for the electrification of personal transport,” he said.

“In Norway, an oil-producing country — where the fossil fuel sector contributes 14 per cent of the country’s GDP and government revenue — EVs are able to contribute more than 80 per cent of new car sales.”

He added that while Singapore has only 140,000 motorbikes in Singapore, there are 100,000 Malaysian motorbikes registered for auto-clearance to cross into Singapore. Half that number enter Singapore daily.

Oyika desires to incentivise those bikes entering Singapore to be electric, (but) it requires coordination on both sides of the causeway. That is no mean feat. If that can be achieved, imagine a much quieter and pollution-free causeway, and the well-being of those who travel to and from Johor and Singapore daily.

It will be cheaper for the riders too, regardless of whether they conduct their battery swaps in Singapore or Malaysia.

Ultimately, Oyika aims to lower the barriers to EV adoption in SEA via the bundling of EV charging with EVs on a monthly subscription plan, starting out with electric motorbikes.

Moving forward, it hopes to expand its footprint in Africa as well as expand the use of its batteries to power off-grid homes. It noted that there are currently 30 million people in SEA and 600 million in Africa who lack access to electricity.

In fact, it is already conducting trials to prove that its portable batteries — which are charged at a swap station powered by solar at a centralised location — can help power homes.

“(It) is a simpler, cheaper and more scalable alternative to individual solar home systems and micro-grids,” he summed up.

The way To Go

Oyika makes the transition from petrol to electric an economically compelling proposition.